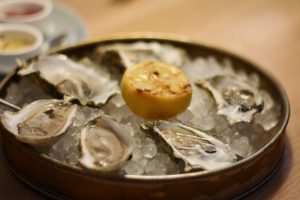 If there’s a single problem with the oysters at The Drake, it is this: They are far too easy to eat. And since they are purchased by the oyster, that can quickly rack up a hefty bill.

Which is why, in those fleeting daydreams in which I’ve won the lottery, I tend to imagine walking into that establishment, removing my monocle and ordering shell after shell of freshly shucked oysters until I am at risk of being arrested by Aquaman.

It’s not that The Drake is the only place in town to get oysters — if anything, since it opened in 2015, I’ve noticed more and more restaurants serving them — but it’s the only place where you can get a variety of types to try.

Is that important? Imagine if every bar in town only served one kind of wine. It might be a good one, sure, but it’s hard to imagine finding a deep and abiding love for wine if all you’ve ever had is cabernet sauvignon.

And much like we talk about “terroir” when it comes to wine — aka, the taste of the land — when we discuss oysters we can consider “merroir”: the taste of the water. Different species of oysters look and taste different, but it can also depend on where they’re grown and how.

You might not delve that deep into it while sitting at the oyster bar, but for people who are interested in expanding their palates, dining at The Drake is a real opportunity. (That said, if you want to split a dozen gulf oysters with me at Brent’s Cajun or Pearl’s, just say the word.)

The oyster selection is part and parcel of being A Good Egg restaurant. Owners Keith and Heather Paul have a golden touch when it comes to opening new eateries. In the past several years they’ve expanded from Cheever’s Cafe to a portfolio that runs the gamut — RedPrime, RePublic, Tucker’s Onion Burgers, Kitchen No. 324 and others. The thought and care put into their establishments is renowned.

You can see and feel that eye for detail all over The Drake. The long oyster bar. Sparse decorations. Wide, circular booths designed for parties to share plates. While that “family-style” aesthetic has quietly faded into the background, I still firmly believe this is a restaurant that begs you to taste and trade with your friends.

I’m not going to pretend to be an oyster expert or imagine that I can cajole you into trying them if you aren’t into it. That said, I am pretty obsessed with trying the oysters at The Drake.

Look: oysters are weird. They’re slimy and briny and you’re not supposed to chew them really. And I think that’s amazing. I legitimately cannot fathom how we came to eat so many different foods, but to drag this one up from the bottom of the sea and pry it open and then decide, yep, I’m going to suck this slimy thing out of this rock is bonkers.

I tried the quilcene, sunset and emerald shoals oysters last time I was there. I’d give you a bunch of recommendations, but there’s a very good chance they’ll have different oysters when you go in. What I will recommend is that you eat at least one of these sans any accoutrement and just taste what an oyster really is. Then you can go crazy with the hot sauce and horseradish and mignonette sauces offered by the restaurant

If you simply cannot bring yourself to dine on mollusks, there are other worthy appetizers for you. Lona Faye’s 4 ‘H’ Club ($13) are crunchy hushpuppies served with hot sauce, ham and honey butter.

For entrees, we first tried the lobster roll ($23) with fries and, I mean, this is hardly fair. Think of all the rolls you usually encounter — Tootsie, dinner, my stomach, cinnamon if you’re lucky — and then imagine a tender, buttery sandwich roll stuffed so full of lobster slathered in tarragon mayo that I’m sweating even thinking about it. And that’s before you get to the shot glass full of drawn butter.

Look at this thing! There’s a claw! This is really good lobster in a sandwich! Oh, it was heaven. I’ve had lobster rolls here and there, but this one took the cake. The meat was tender and light with enough mayo to keep everything well lubricated, but not so much as to overwhelm the delicate taste of the lobster. $23 is a lot for a sandwich, yes, but I don’t think anyone walks away from this plate feeling less than satisfied.

People often think blackened means hot, but that’s not always the case. Blackened spice is a) not black and b) more focused on flavor than heat. A blend of onion, garlic, paprika, salt, pepper and cayenne (among other variations), it certainly can give your tongue a jolt, but it all comes down to the proportions.

The Drake’s blackened redfish ($27), for instance, has tons of flavor — necessary on a mild fish like this — but I didn’t find it particularly scorching. Ditto for the lovely dirty rice that accompanied the fish.

Redfish is ideal for those who don’t like their fish too fishy and blackened spice lends it a lively warmth. The fish itself is firm in texture, but yields readily to the fork, flaking apart into big chunks. Load up a fork with a nice piece of fish, be sure to get some garlic herb butter and pile on the dirty rice.

While I generally eschew ordering non-seafood items at seafood restaurants, this is Oklahoma, which means The Drake is bound by law to offer chicken and beef, as well. My personal weakness is for the black mac and chicken ($15), which has been a stellar menu item since opening night.

Unlike the blackened redfish, black mac gets its name from the squid ink pasta — which is actually spaccatelli, instead of macaroni. Don’t worry about your noodles tasting like squid, however. The flavor of this dish comes from big chunks of chicken, red pepper flakes and Grana Padano cheese.

Oh, Grana Padano. I will forever love Parmigiana Reggiano, but this Italian cheese is truly captured my heart. It has the same nuttiness as Parmigiana, but it melts so much nicer, coating the pasta to form flavorful sticky clumps of noodles and chicken. My friend Megan bravely took a few bites, despite my growling, and she seemed to enjoy it before I grabbed the dish away from her and began licking it.

At this point, even the waitress only jokingly asked, “So did you save room for dessert?” because we obviously had not. Saving room is not one of my skills. But stubbornly forcing more food into my body than should be able to fit is one of my skills, so we split a slice of lemon cloud pie ($8).

The crumbly crust is made of crushed Biscoff cookies — a gourmet touch that is much appreciated — which gave the pie a lovely sweet and salty base. On top is a blend of limoncello and whipped cream that has a tart sting followed by a gentle, sugary embrace. It’s like getting slapped and then immediately kissed. And then going back in for another slap. Truly, it’s no wonder this has become such a staple at The Drake.

And The Drake, in its short time, has become a staple in Oklahoma City. Seafood will never be the norm in our landlocked state, but I’m glad to have places like this to give us fine dining options beyond beef.