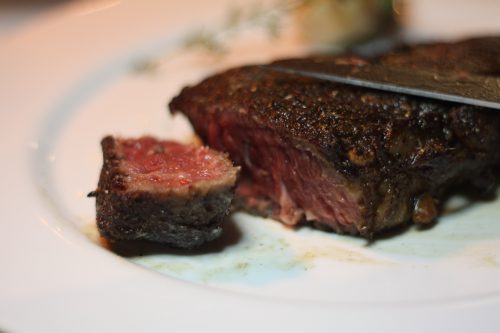 Eating a meal with me making several concessions.

The first three generally don’t bother the other patrons, but taking out a DSLR and standing at the table making vague grunts at every picture I take can get grating fast. And I was especially worried about it at St. Mark’s Chop Room.

Taking a bunch of pictures at Taco Bell will draw confused looks and creating a photo shoot at a casual sit-down restaurant might raise some eyebrows, but here’s the thing about St. Mark’s: there are only six tables. 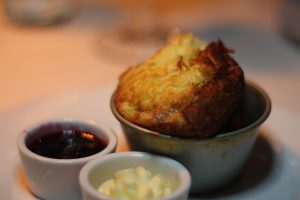 I turned on my little ring light to get pictures of my steak and legitimately hoped none of the other guests would get up and try to take a swing at me.

Not that the clientele at this Nichols Hills steakhouse is prone to fisticuffs, but I don’t want to be the jackass messing up someone’s special night out.

Make no mistake: St. Mark’s Chop Room is absolutely a special night out, whether you’re celebrating something or not. There’s something very intimate about the sparsely decorated room. You cannot get away from anyone in the restaurant. At best you might hide around the corner of the bar, but everyone can hear everyone.

It’s not a loud restaurant or an uncomfortable one. It’s small. But that’s by design. It’s cozy, but it retains an air of sophistication.

Everything feels precise and thought out in a way many restaurants aren’t.

The prices at St. Mark’s demand thought, not just from the kitchen but on your part as well. They want everything to be worth your money as much as you do. So you should choose carefully and listen to your server.

Eleven times out of ten, your server is going to know exactly what you should order. Ask their advice and take it — and that goes for just about everywhere.

My friend Megan bravely threw herself on the Greg-shaped grenade and joined me for an evening of indulgent gluttony. She was there for the food. I wanted her there to avenge my death in case any of the other patrons got mad at me for meticulously documenting everything in photos. 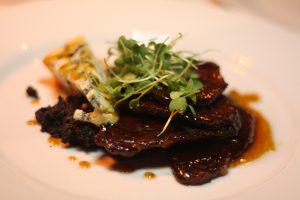 Before ordering, our server brought out fresh popovers with butter and jam. I’m not terribly familiar with popovers, but the best description I can think of is like a very eggy dinner roll that you probably need to eat with a fork. Megan compared it to a savory bread pudding, but instead of being wet it was pliable.

“Don’t fill up on bread!” yells the voice in my head, well, sorry voice, but I love bread. I’ll fill up on bread all the live-long day, doo-dah, doo-dah. The jam was delightful, but I was more than content than to just drench the whole mess in butter.

Next came a plate of truffle-glazed wagyu beef bacon ($16) and I think it’s a good time to tell you about St. Mark’s beef.

Lots of steakhouses talk about getting prime beef, which means that the meat is in the top three percent of graded beef. (Not all beef is graded, however, and some producers have to pay to get meat graded, so there’s some pay-to-play involved in the system.) To get prime beef, restaurants source it from all over the country.

St. Mark’s gets their beef from one place: Iron Horse Ranch in Macomb, Oklahoma. It’s wagyu beef, which literally translates to “Japanese cow.” Wagyu are four breeds of Japanese cattle. It’s probably most famous because of Kobe beef, which comes from wagyu raised in Hyōgo Prefecture. We don’t need to get into the weeds here, but wagyu is a much sought after beef and, considering Jonathon Stranger is part of the team at St. Mark’s, you can be sure it’s locally and ethically raised.

Beef bacon, like pork bacon, comes from the belly. The marbling makes this fatty cut very juicy and tender. Honestly, if it had just been a plate of bacon, I probably would have been happy. I mean, I love bacon.

But the truffle-glazed beef bacon comes coated in a slightly sweet, umami-rich sauce along with a wedge of high-end bleu cheese and a peppery cocoa puree that had the texture of coffee grounds, but spread easily onto the bacon. 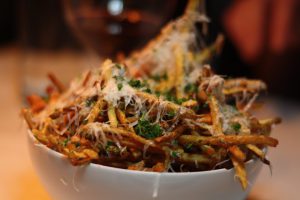 I know it’s my job to describe this to you, but my mind is going in every different direction because the flavor went everywhere. It’s a rollercoaster you want to stay on almost as much as you want to take every piece of it apart and figure out how it works. The cheese is tart and funky, but mellows quickly. The coca puree is spicy and sweet and dark and rich. The bacon has a gently chew to it — more substantial than carpaccio but not quite as sturdy as steak.

Megan and I did the polite dance in of constantly leaving a little bit more for each other, but when push came to shove, we both wanted that last nub of cheese and it quickly became clear she was prepared to cut a bitch.

We split a house salad ($12), which was described as all locally foraged. The base of the salad were microgreens tossed in a blackberry vinaigrette with thinly sliced pear, pickled egg, heirloom tomatoes and cheese. This is another instance where you’ll want to take it apart to taste every item separately and then combine them to find out what you like so much. For me, it was the peppery greens, the sweet-tart dressing and pear. The texture was phenomenal, crisp and tender, with a lovely fruity flourish.

“ARE YOU EVER GOING TO TALK ABOUT THE STEAKS?” 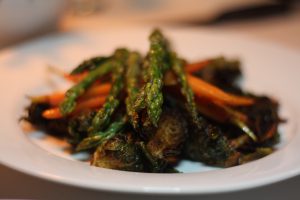 Easy, baby. Let’s not rush. Just like a great steak, this review is meant to be savored. Light a candle. Turn on some Enya. Let’s get romantic and discuss the importance of side dishes.

Okay, yes, it’s not a steakhouse without steak and St. Mark’s is definitely focused on the meat. But without great sides, even a top-notch steak can seem one note. So please, please, please do yourself a favor and order the roasted seasonal vegetables ($12).

A plate of Brussels sprouts, carrots and asparagus might not flip all your switches, but these were exceptionally done. The sprouts had a delicious crispy char. The heat opened these mini cabbages up and caramelized the sugars throughout to create a roasty salty treat. The carrots were…unbelievable. I’m not someone who gets effusive about carrots a lot, but good lord, great produce handled carefully and cooked minimally can be eye-opening good. Asparagus is always a joy, frankly, and these tender spears were full of that fresh green spring flavor balanced with roasted oil and gentle seasoning.

The rustic charms of the roasted vegetables balanced well with the bold punch of truffle parmesan pomme frites (aka fancy french fries). Delicately shredded parmesan and bits of greens decorated thin, crispy fries that I would have grabbed by the handful and shoved into my mouth in any other setting. The truffle oil is applied judiciously, thank goodness, which means you get a hint of it without getting completely overwhelmed with mushroom flavor. 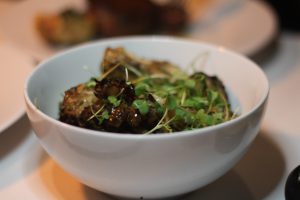 For that, you should get the roasted maitake mushrooms, which are exactly what they sound like. Maitakes are commonly known as hen of the woods mushrooms and they are multi-chambered, giving them lots of surface area for roasting to have an effect.

You know how people say mushrooms taste meaty? I don’t always agree. But these tasted meaty as all get out. 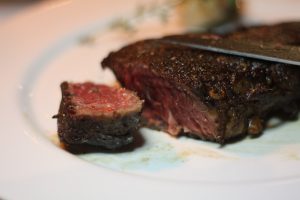 Okay, let’s talk steaks. I had the 14-oz. ribeye ($48) cooked medium-rare. A ribeye is a fattier cut than just about any other steak I can think of, but that means a lot more flavor. It’s the beefiest of steaks and quite tender, thanks to all that fat that soaks into the meat as it cooks.

The crust was phenomenal, crisp and dark, but it easily gives way to the rich, red meat underneath. When I say this was the definition of medium-rare, I mean it was edge-to-edge perfection. And even when I got a particularly fatty bite, it wasn’t chewy — it just melted with each bite.

Megan got a 6-oz. tenderloin ($42) that was so tender it dated a girl for a year before giving her a chaste peck on the cheek. She got it rare, because she’s awesome and a little scary, and it was also cooked to the perfect temperature. The crust was flavorful, which is big on a filet. Tenderloins are exceedingly mild thanks to a very low fat content, but this was an all-around excellent steak. 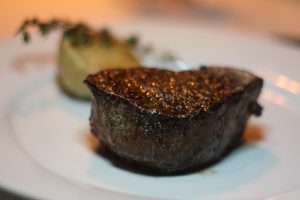 These aren’t steaks that require a lot of sauce, but if you’d like to order one, let me recommend perigueux sauce ($7) made with Madeira wine and truffles. It’s rich and adds another savory, umami note to your meat. (It’s also pretty awesome for dipping pomme frites, in case you were wondering.)

For dessert, we shared the seasonal blueberry cobbler with ice cream and, despite being so full at this point it was basically a prequel to the scene in “Se7en” we could hardly stop eating this. The fruit was sweet, but balanced with a mild tartness. The creamy ice cream paired well with the crunch of the crust and granola scattered on top. 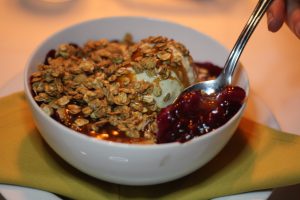 I think it’s perfectly okay to St. Mark’s for a glass (or bottle) of wine and a dessert. In fact, I’m kind of planning on it in the very near future.