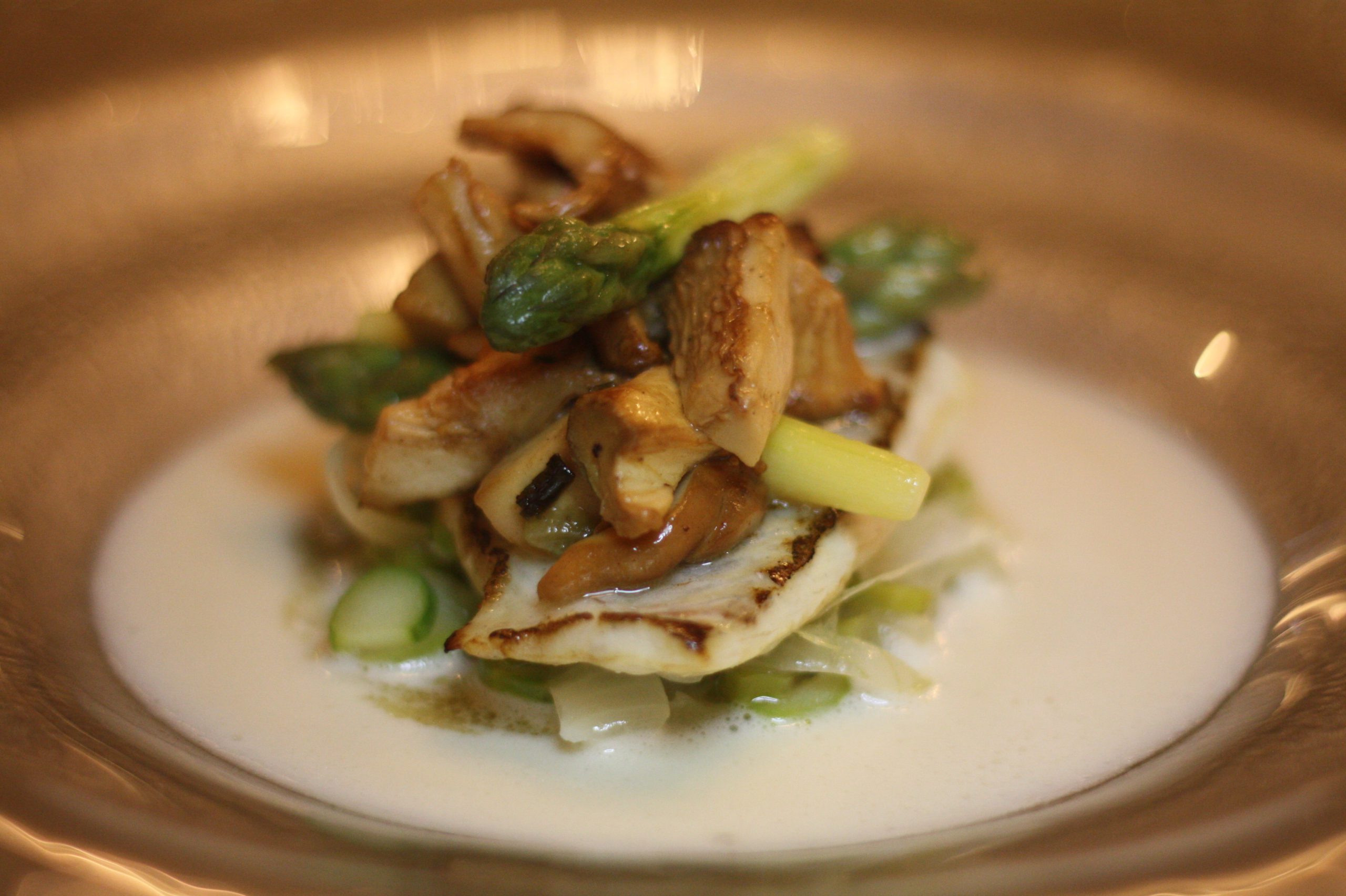 There are meals you will always remember. Maybe it’s the last time your grandmother baked a lasagna for the whole family. Maybe it’s your first Michelin-starred meal (I’m still waiting on mine).

I’ve had several indelible meals in my life, but the most recent came in an almost entirely empty restaurant—usually a bad sign—on a Tuesday night in Edmond, Oklahoma.

Now, I grew up in Edmond, so I’ve had quite a bit of time to examine and understand the city’s cuisine. There are some great steakhouses in town. Some wonderful Mediterranean restaurants. More than our fair share of fulfilling breakfasts and Tex-Mex restaurants.

Good stuff. Some great stuff. But Fait Maison served me a dinner that I cannot stop thinking about, talking about, dreaming about. I went in expecting a lot. I left completely floored.

The disconnect between the exterior and interior plays a part. Located in what used to be a menswear store…that I once modeled for, which is a fact even I have trouble believing, despite being there…Fait Maison lives in a very plain, white, one-story building.

Open the door, though, and it’s a different world. Opulent. Plush. It’s so fancy, it almost demands the use of the modifier “schmancy.” There’s a small parlor to wait in befeore you’re seated. Beyond a small screen is the dining room, where cream-colored benches and tables are accented with pops of white and beige. It’s intimidating, in a way. As is the attentive service. But I wouldn’t change a single thing.

There’s no dress code that I’m aware of, but it’s the kind of place where you want to dress up, if only to impress your server. A jacket and tie feels very right in Fait Maison. And pants. Look, you’re going to want to wear pants, or at least some kind of covering from your waist to your thighs—an area I call “your business.”

“Okay, but why was it empty?” you may ask. I’ll tell you: It’s expensive. High-end steakhouse expensive. Check your bank balance before you make a reservation expensive. If-this-wasn’t-sponsored-I-couldn’t-afford-it expensive.

A Tuesday night in Edmond, Norman, Oklahoma City, Yukon, Del City, or anywhere else in the state is not necessarily prime time for people looking to drop serious cash on a serious meal. But if you’ve got the money, honey, hoo-boy: It’s worth it. For me, at least, it was a perspective-shifting meal.

Once you’re seated and presented with both the food and alcohol menus, a small tray makes its way out of the kitchen and to your table. Ours included a pair of small creampuffs (or what looked like creampuffs), two macarons, and a little dish of tiny olives.

The creampuffs were filled with a creamy, savory cheese. The macarons were flavored with Dijon mustard. The olives had pits (we were warned). It was weird. And wonderful. And it was just the beginning.

I could have eaten, conservatively, 30-odd savory cream puffs.

The macarons were straight-up bizarre and also perfect. Like, I haven’t had a mac that good since I visited Paris, even though the flavor went from sweet to Dijon mustard and back to sweet again. I’ve thought more about that macaron than I have any other meal I’ve eaten in the last year.

The texture was everything. Literally, it had all the textures. Crispy on the outside, crackling as it touches your teeth, then chewy as you bite through, with a creamy center right in the middle. It was magical. I find my mouth mimicking the act of chewing as I type this, like the sense memory is trying to trick my palate into reliving the flavors.

We ordered starters and entrees and sides next. All at once. The server said that’s how they do it there, so that’s how we did it.

What came out next was not our starters, but another amuse bouche (which quickly became Jess’s favorite dish of the night): pea soup with a whipped bacon cream and a sprinkling of sesame seeds.

First you taste the soup, light green and creamy, like spring had arrived several months early and only on your tongue. Then a touch of the bacon cream, rich and salty and smoky. Then a bit of each, that insanely perfect balance of sweetness and vegetal flavors. Alone, each component was wonderful. Put together, I swooned.

I feel bad for the bread. Not that the several varieties of freshly baked rolls and miniature baguettes and salted sweet cream butter were bad—quite the opposite, actually—but next to the soup they were an afterthought.

Next came the starters. For the lady, sea scallops atop a saffron-potato emulsion with a green onion, apple, and hazelnut crumble ($29). There were two very large scallops, absolutely lovely big fellas, with seared tops and a pile of those perfectly cubed veggies and fruits and nuts on top. The saffron-potato emulsion was whipped up and frothy and smooth, only interrupted by those crunchy bits of crumble that fell off the scallops.

I love scallops. I love how easy it is to tell when a chef knows how to work with them, knows how to choose quality specimens, and when they don’t. I’m not sure if it was chef/co-owner Olivier Bouzerand or chef Derek Courtney who prepared our meal, but whoever was back there knocked these scallops out of the park.

Much as I love French onion soup ($12), I wasn’t enamoured with this version. Usually, I’m jonesing for more bread and more cheese, but this soup just needed more soup. The baguette croutons and Comte cheese are great, but they took up so much room (and absorbed so much liquid) that I didn’t get as much of that dark, caramelized onion flavor as I wanted.

Turbot is a fish I’ve only ever known because Gordon Ramsey was yelling about it. I would also like to yell about this turbot filet ($45), so here it goes:

I WOULD LIKE TO EAT MORE OF THIS TURBOT! I WANT IT SEARED IN BUTTER, BATHED IN A CREAMY CHAMPAGNE SAUCE, AND SERVED WITH THINLY SLICED PIECES OF ASPARAGUS AND MUSHROOMS!

If you’re afraid of fish, you will love turbot. It’s mild, it’s firm, and it is the perfect base on which a chef can craft delicate flavors. Also, the portions are small—not great for me, but nice for people who are still getting used to fish.

My dinner date always outdoes me when it comes to ordering and this time was no exception. The duck ($38) was exquisite. Roasted with a red wine and black currant reduction and served with root vegetables, it was spot on, but then there was a small dish on the side full of some of the best duck confit I’ve ever had. I want that confit everywhere and in everything. It’s just…wow. WOW! Creamy and savory and richer than a Powerball winner who got in (and out) of Bitcoin at the right time—utterly magnificent.

But, as good as the duck was, I thought the buttery mashed potatoes (French style) for $12 and the French ratatouille for $11 were essential sides. I mean, I want to go back and try everything. All of it. But those potatoes were…something else.

I love mashed potatoes. I made five pounds of them for Thanksgiving and it wasn’t enough. But this little copper pot filled with the creamiest, butteriest, best-all-around-est mashed potatoes I’ve ever tasted nearly stole the show. It was potatoes and salt and butter and cream and, most importantly, technique. Somebody back there knows how to cook.

The ratatouille was, well, it looked like what Remy served at the end of the movie “Ratatouille” and it tasted like what I imagine he served to Ego that made him weep with joy. Tender, fresh bites of spring in a mild pesto with bites of olives. I wanted more, even though my body was telling me I couldn’t handle much else.

So, of course, I ordered dessert. Because a French restaurant that serves a bourbon vanilla bean creme brûlée ($11) must know what it’s doing and, boy howdy, it really does. The bottom of the bowl was almost completely black—a sign that the chef used a lot of real vanilla beans—and, beneath the gorgeously crispy sugar shell, the custard was immaculate. Every bite jiggled and swayed as I lifted it to my mouth and then, BOOM!, a rush of dark, vanilla sweetness cascading over my taste buds.

I couldn’t eat any more, but I finished the bowl. The pain of being stuffed beyond belief was worth every bite.

And Fait Maison, the extremely fancy, very pricey, almost completely hidden French restaurant in Edmond was worth every minute and every dollar I spent there, and then some. Save up for something special and try it yourself.